The must do locations for photographers in Edinburgh

Edinburgh is photogenic, it has a iconic skyline, there are men wearing skirts and tons of students, which can change your trip into a photographic safari. Here is a list of the best places where to unleash your inner photographer in the Scottish capital.

The Royal mile never disappoints if you’d like to take snapshots of people. The closer to August the better. During the Fringe festival it changes into one big street theatre, with sword swallowers, a Capella choirs and hundreds of people watching.

Most people head towards the Castle, but you don’t have to pay the hefty entrance fee to enjoy some people watching. Simply walk up to the castle entrance, pretend you’re admiring the views and snap away. 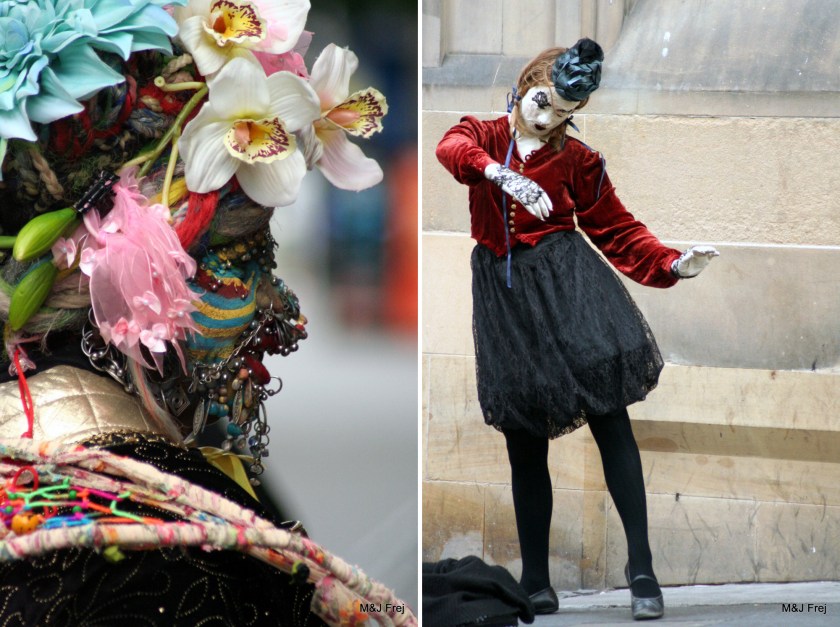 New Town in the morning

Ladies in high heels walking their dalmatians and if you’re lucky dog walkers with 5 canine animals with a pedigree on tangled leashes. Walk around Moray place, Heriot Row and Dundas Street, where local higher class ladies go to buy their monthly fix of fine art. Broughton Street is the best place to spot street style.

On a warm day the Meadows becomes the best place for people watching. You will see circles of drummers with long hair, students drinking beer and groups of men in super clean white clothes playing cricket next to their super cars.

There is usually one man in a kilt playing bagpipes on the corner of Princess Street and Waverley Bridge and another one on the in front of the St Gile’s cathedral on the Royal Mile.

Arthur’s Seat – the inactive volcano – is the highest point in the city from which you can admire the skyline ad views of the sea. The climb up is around 250m and is relatively easy.

Calton Hill – a small hill in the East End of Princess Street with iconic monuments including: the National Monument, the Dugald Stewart Monument, Nelson’s Monument, and the building of the Observatory. The views extend from the Firth of Forth Bridge all the way to North Berwick. In short it offers the best views of the city.

Sir Walter Scott Monument – built in the 1840s to commemorate Sir Walter Scott, one of Scotland’s greatest novelists, it offers great views of the Princess Street, Princess Gardens and the Balmoral hotel. You can climb p for a small fee (£3). Opening times in Spring and Winter vary. Check the website for more details

National Museum Roof Terrace – Not many people know this but you can visit the National Museum of Scotland just to admire the views of Edinburgh skyline. Take a lift to the top floor and enjoy the views completely free.

Edinburgh University Appleton and David Hume Towers – These pieces of 1960s architecture is now a firm part of the Scottish capital skyline. These are university building which means you can come in and out as you please, as long as you look like a student or a professor. Take a lift to the top floor and look for a window.

Views of the Castle

The Edinburgh castle is difficult to miss, but you’d be surprised how many tourist have stopped me over the years to ask where the castle was. The best places to see the castle from the frog’s perspective include:

Quite a few of Edinburgh Public Schools look like Hogwarts. In fact Harry Potter was allegedly written in one of the city’s coffee shops called the Elephant House.
Schools, which do resemble Hogwarts descriptions include: Fettes College, George Herriot School (it even has 4 houses with color coded uniforms) and Stewart Melville School. Hire a bike and go on a Harry Potter tour if that’s your thing.

Another place which looks straight from the world of wizards is Teviot – a purpose built student union house which hosts 5 bars and is the place of student entertainment at University of Edinburgh. During the day you can enter the building freely. Go to the Library Bar (a library converted into a bar with a super narrow spiral staircase) and to the 3rd floor to see the Debating Hall, which was considered for use as the dining call in Harry Potter movies.

Victoria street seen from the top or from Grassmarket

View of the castle from Greyfriars Kirk

View of the Castle and Grassmarket from Candle Maker Row

Must do locations according to the local photographers

Cramond Island and its causeway at low tide

Edinburgh is a picturesque place to photograph so just walk around with your camera and I’m sure you’ll find something interesting to capture with your lens.

To see some of the best pictures of Edinburgh, visit the Flickr page of Grant Richie, a local photographer

Hi, I'm Maggie. I write about things that matter to me: my life in Scotland, travelling, my work (medicine) and motherhood. This is a personal blog, thanks for dropping by.

Fresh out of the oven

Postpartum period is…Towards the end of the first week since the little one was born I...13th February 2016

Motherhood: month 1I decided to document the moments and details of our first weeks with the little...3rd February 2016

First weeks with a newbornI had never been afraid of newborns*. Until, I had one of my own....31st January 2016

I’m no fool, mother natureI was chatting to my sister the other day about my thoughts about birth....26th January 2016

Hello, it’s meIt’s been three weeks since Marysia was born. Her name is Maria but we...26th January 2016